(The following is excerpted from Chapters 1 and 2 of "The Ins and Outs of Poop" by Dr. Tom DuHamel.)

April is an almost 5-year old girl who was referred by her pediatrician because of severe constipation. From the moment she first walked into my office, it was clear that April was struggling to hold back her stool. Every few minutes, she would get a strained look on her face, stand up straight, bend her upper body slightly forward and squeeze her knees together. When her mother pleadingly suggested that she go to the bathroom, April grimaced and stated emphatically, “I feel fine. I do not have to poop!”

In more severe cases, functional constipation causes children to become stool incontinent or to “soil” or defecate in their clothing. A medical term for stool incontinence is encopresis.

Functional constipation is not a disease but it does cause serious physical and emotional problems and can be difficult to treat. It can be prevented by knowing what to do when your child develops mild or occasional constipation.

Functional constipation follows a fairly predictable course. It usually begins with an uncomfortable or painful bowel movement which can occur as early as the first few months of life. Following one or more painful bowel movements, a child begins to withhold stool to avoid pain whenever he or she feels the need to “poop.” This is exactly what April was doing in my office. Initially, April’s decision to withhold stool was voluntary, but as her uncomfortable bowel movements continued, her withholding became what psychologists call a conditioned avoidance response. It was no longer intentional because it happened automatically. In other words, the act of withholding developed into a habit which continues even when April’s bowel movements no longer hurt. 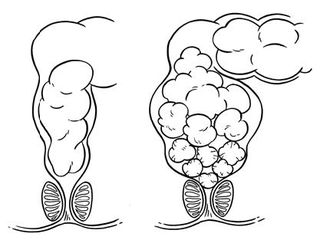 Withholding causes stool to be retained in the rectum. The rectum stretches to accommodate increasing amounts of stool. It becomes less sensitive and less adept at signaling the need to poop. This often leads to stool incontinence.

Moreover, once the rectum is stretched, it remains stretched for a long time even after the excess stool has been removed. While the onset of functional constipation can occur quickly, breaking the habit of withholding and giving the rectum sufficient time to shrink back to its normal size can take many months or years.

In order to treat functional constipation effectively, parents and pediatric healthcare providers must collaborate. Over the past 25 years, Dr. Tom has developed a six step progam that must be followed to effectively manage functional constipation. Your pediatric healthcare provider will get you started but you will be the one who provides the bulk of your child’s care. Dr. Tom's book is designed to help and support you through this process.

Each step is explained in detail in my book "The Ins and Outs of Poop" along with the tools needed for successful implementation, such as forms for data collection and instruction in the use of laxatives and incentives. There are many stories written by parents describing specific aspects of their child's treatment. The book is written in a light-hearted tone and uses cartoon-like illustrations to highlight key points and anatomy. 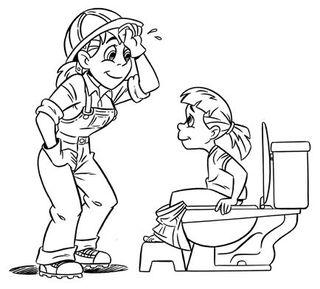 From beginning to end, the course of treatment for functional constipation is stressful for everyone including healthcare providers. In my sessions with parents, I tell them that I am their coach and cheerleader. My job is to help them perform to the best of their ability, but they are the ones who have to carry out the game plan. Success requires that parents and providers know not only what to do but also how to do it. As difficult as it may be, parents and providers need to maintain a positive attitude. A negative or punitive attitude will only make the problem worse.

My book is full of advice and ideas on how to remain positive during what can be a long, hard road. You (and your child) can do it!